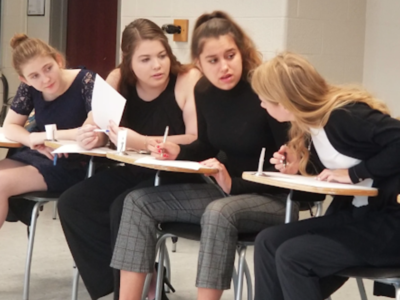 In a year that many want to forget and move forward, the Saline Debate Team will fondly remember 2020 because they won state titles and many other awards. The Varsity High School Debate Team, of seniors Abby Berwick and Paige Haddas, took first place in the Michigan Interscholastic Forensic Association state finals. They debated the resolution that the United States should adopt a declaratory nuclear policy of no first use. Additionally, the Novice High School Congressional Debate Team, specifically first year Sarah Yousif, took first place in the state competition.

Regardless of hybrid or virtual classes, the tournaments were online this season, and the debate team won more than state titles; they won speaker trophies and tournaments, too.

The Novice PF team was also quite strong. Novice PF debaters Neil Sachdeva and Lizzy Sandru placed second in the Open PF tournament at Detroit Country Day and were finalists at the Pappas debate invitational. The dynamic pair of Eva Cueto and Lola O’Connor were PF semi finalists at West Bloomfield, co-champions in Holt, and quarter finalists at Groves High School. And first year students Collin Brophy and Michael Bryant were semi finalists at the Dexter Delite Tournament.

In Congressional Debate where competitors write bills and resolutions and debate them for passage, Saline had a greater presence than ever before. At the varsity level, Ryan Courtney won the Groves High School tournament and came in second at the Pappas and Dexter tournaments. Yousif also placed second in the Varsity Pappas tournament.

There were high school tournaments proceeding the state finals that began in September and ended in December; the next two tournaments in February and March will qualify debaters in Public Forum and Congressional Debate for the National Speech and Debate Tournament in June in DesMoines, IA. Saline has qualified for Nationals for the last four years.

The complete list of awards can be seen in the chart below - there are too many to list. Congratulations to all! 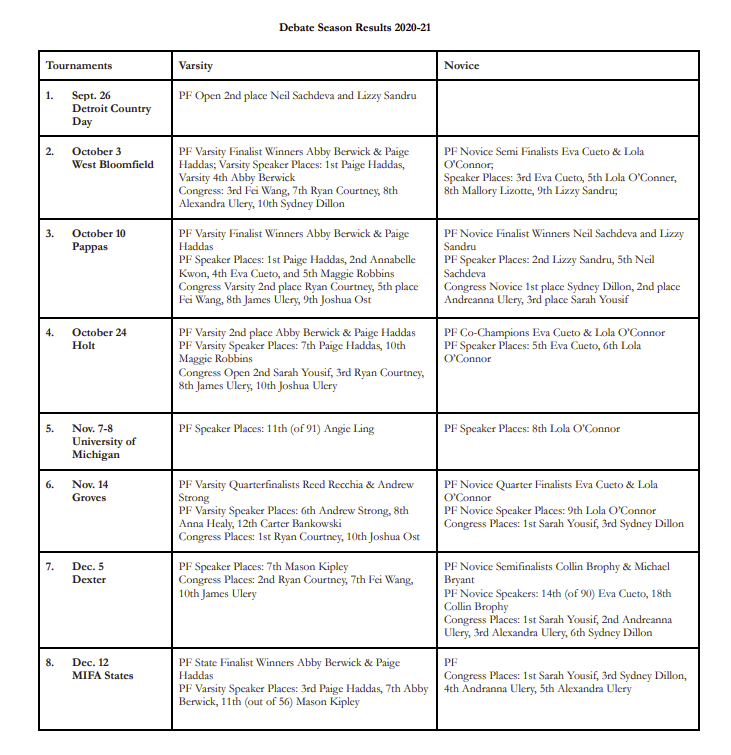 Earlier this month, Superintendent Laatsch announced the hiring of the next Assistant Principal of Saline Middle School, Lindsay Guenther.

SAS Board of Education Trustee Interviews

The Saline Area Schools Board of Education announces the slate for interviews tonight at their Special Meeting, beginning at 5:30 pm.

The Saline Area Schools Board of Education has a vacancy and is seeking a member of the community to hold the office of Trustee until the next regular school election on November 8, 2022. The term will expire on December 31, 2022.