Saline High School Science Olympiad off to a Strong Start 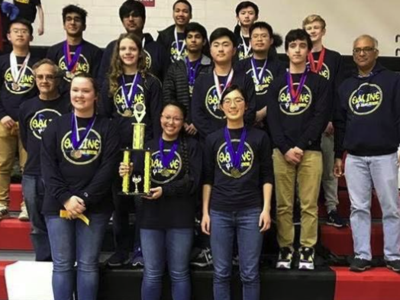 The cancellation of the 2020 season last year meant the Saline High School Science Olympiad competition team had to pivot to new goals.  After a very productive summer of giving back to the community in this time of need and being featured on WXYZ for their efforts, the fall arrived, and the team trained to work in a new virtual setting.

Virtual competitions meant less team interaction and certainly diminished the social aspect of the team but it also allowed the team to compete in locations they had not been to previously.

Saline started the virtual competition season in early October “in” California with the Bear Tournament against nearly 200 other teams. Many were national top 20 teams.  Saline took 22nd overall.   Several events featured new students, so those students had to put in a lot of extra effort to return their events to the previous years level.  Those event teams set several improvement goals for the November Tournament in Palatine Illinois.  Saline took a team 5th.

Perhaps the most exciting result so far occurred on December 5th when Saline attended the Northview Tournament, based in Sylvania Ohio.  That tournament is typically the first tournament of the season- but this year it was actually Saline’s third.   The tournament typically hosts many of the Midwest’s top teams.  This year was no different, though many teams participated from other parts of the US.

I am really proud of the team,  they have worked really hard to switch formats,  dealt with a lot of churn from the national program due to late rule changes and late event changes.  They have really risen up to this year’s challenge.  Akella said.

The team moves on to their next tournaments on January 9th.  One group will compete virtually at Westlake, Ohio the other will compete at Carnegie Mellon University.

“I am excited to take my team ‘home’ to Carnegie Mellon as it’s where I went to school- so it’s full circle for me”  Akella noted.

Science Olympiad is open to all students regardless of ability.  The team is especially in need of sophomores to the roster.   Students may join any time of year by contacting Nath Akella,  Akellav@salineschools.org.

SAS Board of Education Trustee Interviews

The Saline Area Schools Board of Education announces the slate for interviews tonight at their Special Meeting, beginning at 5:30 pm.

The Saline Area Schools Board of Education has a vacancy and is seeking a member of the community to hold the office of Trustee until the next regular school election on November 8, 2022. The term will expire on December 31, 2022.

From the Saline High School Counseling Department: In the counseling office, we are often notified if employers are looking for employees.  The following companies have recently reached out to us.  If you are interested, please feel free to pursue.