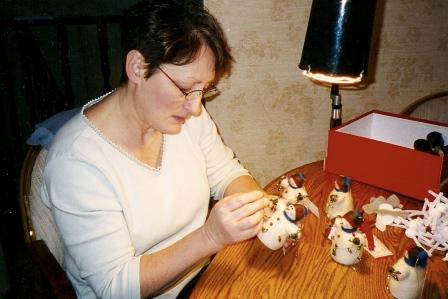 Theresa Malik has been a crafter since 1991 and enjoys presenting her woolen figurines and characters at the Saline Craft Show. She started with a bear and bunny, and today designs new animals from public requests including Santa's and scenes with a variety of characters. Theresa obtains her wool in PA from a local farmer who raises Dorset and Border Leicester sheep. Using their natural colors of cream, dark brown and gray, she has learned to dye other colors. Her wool is cleaned here in Michigan at Zeilinger Wool Company in Frankenmuth and she then begins. Using wire and Styrofoam balls or chenille stems and Styrofoam that become the frogs, cats, and her original bunnies and bears. The majority of her creations use a Styrofoam ball but she also uses cone shaped Styrofoam.  “I often demonstrate at shows,” Theresa relates, “ and it makes all the hard work worth it when people take a liking to my woolen figurines. Her Santa beards are from the Border Leicester sheep, and she cleans this herself. During her career she has traveled from PA south to KY and west to IN as she pursues the crafting world. She has also sold her figurines to children’s book publishers to depict animals in their stories. Theresa enjoys her career and her customers and looks forward to meeting you.